Our neighbor Ms. Hori is really quite something. I told her that we were going to Hanamaki to visit the Kenji Miyazawa Memorial Museum and see the Kenji Festival that is held September 21 each year, but we didn't know anyone there. So she rang up one of her friends to see if she could get us some kind of introduction.
There used to be a restaurant where I live in Ena called Yamaneko-ken, or The Wildcat Restaurant, taken from Kenji's The Restaurant of Many Orders. Ms. Hori's friend was the owner of that restaurant and they had actually been to Hanamaki to ask permission to use the name from the originalYamaneko-ken restaurant in Hanamaki - located right next to the museum.
So she introduces us to her friend Mr. Ono at the Yamaneko-ken restaurant in Hanamaki and then when we arrive in Hanamaki he very kindly introduces us to Mr. Oda who is a director at the museum and he gives us a personal guided tour of the museum.
I tell ya, that Ms. Hori is really something.

I found all of the people in Hanamaki to be extremely welcoming and always ready to help you out with any questions or just happy to have a chat. I only stayed there 3 nights but I felt like I could have stayed there for a couple of months. We stayed at a placed called Kenji no Yado which is a bit of a cross between a hostel and a hotel, with shared toilets and facilities. It's simple, but it's more than enough and the staff there are super nice. The bath there is a wooden hinoki bath which has a wonderful feel and smell to it when it is full of steaming hot water. If you are like me, as soon as you try a hinoki bath, you'll find yourself thinking about trying to put one in your own bathroom. There is no room for one now, but I am thinking I could put one outside under the bamboo forest...(just dreaming). 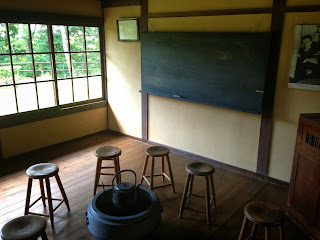 One of the highlights of the trip was a visit to Kenji's old house that he lived in when he started the Rasu-chijin-kai, after he quit teaching at the school. The house was originally built by his grandfather. The idea of him living here was to help the farmers make their farms more productive and to make farming more interesting by introducing the farmers to all kinds of music and plays. Kenji was a man with a lot of great ideas, but unfortunately he wasn't great at bringing them to fruition. One reason was because his mind's engine was running at a speed others couldn't keep up with. 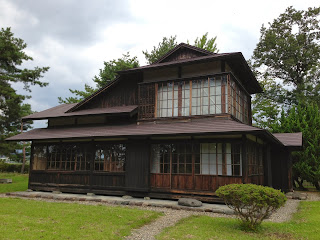 Another reason was because his body gave out on him.So after less than a year, he went down with pneumonia and was forced to give up the house and move back in with his parents.
But the house has been beautifully restored and now sits on the grounds of a high school. There is no gatekeeper here so anyone can just wonder in and have a look around as they please. It is actually a little hard to get to, but that is good because that means there is hardly anyone there and it is nice and quiet. It certainly is a beautiful house, but with all the snow that Hanamaki gets during winter, it would be a bit chilly living here. 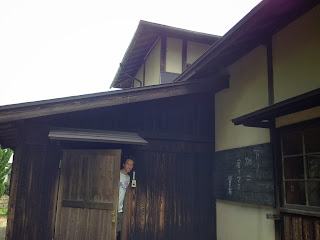 And this photo on the left is the famous blackboard that says "下ノ畑ニ居リマス" (I'm down in the bottom field) so that anyone who came to visit him would know where to find him. The chalk looks fresh so I guess that someone rewrites it everyday, which seems a nice thing to do. Why has it become so famous? I think perhaps because it is a symbol of Kenji as a learned and cultural man making farming his priority ahead of everything else. And it would be the dream of a lot of people to just hang a sign like this by their front door, forget about everything else, and just go and tend to some veggies. I bought a sign of my own!
Posted by Paul at 9:04 PM No comments:

Email ThisBlogThis!Share to TwitterShare to FacebookShare to Pinterest
Labels: Kenji Miyazawa, Rasu-chijin-kai, Restaurant of Many Orders, Trip to Hanamaki

A Cheaper Way to Watch an Aurora

If you wanted to see an aurora you could choose northern Europe, Alaska or Canada as your destination, but apparently, the best weather, and therefore the best chances of securing your aurora viewing would be in Alaska.
Now if you did go, you'd probably want to take a few photos or videos of the event. But how good your photos would be would depend on the quality of your equipment and the quality of the auroras while you were there.
So if you wanted to take that a step further and make a business out of photographing auroras then you'd need to get the best equipment (able to withstand below freezing temperatures) and spend a lot of time going back and forth to Alaska.
Yesterday I met Tetsuya Nakagaki at one of his aurora cinema nights that he conducts all over Japan. He has traveled to Alaska from Japan 40 times, and he calculates that in travel alone he has spent over US$200,000 collecting images of auroras. That certainly makes the cinema fee of 1,200yen (around US$12) seem pretty reasonable.
I have always been a big fan of Michio Hoshino's photography. I've never been able to forget the playful images of the bears in his photos of Alaska. Not to mention that photo of a moose chasing a grizzly bear! And Nakagaki's images of auroras over the top of a lake while he sits by the fire (probably sipping cocoa and eating marshmallows) makes it hard to resist. I hope I can make it there soon!
You know, I'm sure Kenji Miyazawa would have loved to visit Alaska and watch an aurora.

Roadtrip to Hanamaki - Some tips about driving on Japanese freeways

Last month I went on a 1,600km road trip from Gifu prefecture where I live, all the way to Iwate prefecture, where the children's author and poet Kenji Miyazawa was born and lived most of his life. It was a long trip and there are many things to talk about, so I'll divide it into a few different posts.
One of the most impressive things about Japan is the number of freeways (toll roads or kosoku-doro) that zigzag all over the country. You can get a tollway credit card (ETC card) and stick it into an ETC reader concealed in the roof of your car or somewhere on your dashboard, which will allow you to pass automatically through any tollgate. It is then tallied up and you pay it off at the end of the month, just like any other credit card. I don't know what the tolls are like in Australia these days, but when I was living in Melbourne you could drive around for the weekend on all the tollways for something like $10. Even at twice the price it would still be a lot cheaper than driving on a tollway in Japan. The total toll charge for me on the way to Iwate was something like 10,000 yen (about US$100) and there were several sections that I chose not to use the toll road. That is a fair chunk out of your travel budget. But tolls are usually half price when you travel on a public holiday, so on the way back it was a bargain at only 5,000 yen.
One of the reasons the roads are so expensive is because Japan is nothing but mountains, which adds a lot to the cost of building them. You'll often find yourself traveling endlessly down a tunnel. The longest tunnel I traveled on was the Mt. Ena tunnel at about 8km. It doesn't sound like much but when you are stuck in a dark dripping tunnel with no emergency stopping lanes it feels like you are in there forever. When you finally get to the end of the tunnel you are on the other side of a big mountain range and sometimes you'll find yourself driving from a cold blue sky into a terrible blizzard, which is quite surreal.
A few pointers about driving in Japan. Cars are expected to make way (if they can) for other  cars entering the freeway, so if your car navigation system warns you that other cars are merging and you see a car coming into your lane, it's best to change lanes if you can or make room for them somehow, because quite often people don't even look.
There are lots of signs that say the speed limit is 80km/h, but that isn't actually for passenger cars, it's for large trucks and other vehicles. For passenger cars the speed limit is 100km/h.
There are a lot of drivers that spend the whole time in the overtaking lane. Some people do that in Australia of course, but nowhere near as much as in Japan, so you just have to get used to it.
There are also a lot of drivers that if they want to overtake you or they are thinking about overtaking you they go right up to your tail and you can see every detail of their face clearly in your rear view mirror. There is nothing you can really do about it, just hope that you don't have to brake in a hurry.
But overall the roads are extremely smooth and far more convenient than ordinary Japanese roads where the speed limit ranges between 50 and 70km/h. Of course if you have time it is much more interesting driving on the ordinary roads, as the toll roads are quite high up and you can't see very much. Not to mention that it is much easier to take in the scenery going 50km/h as opposed to 100 or 110km/h.